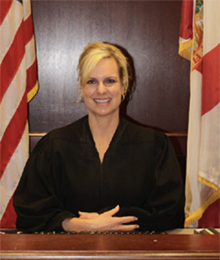 What inspired you to go to law school?
I have always looked for the “right” outcome for any given situation.  My youthful perspective of the world involved a belief that there was a “right” outcome in every circumstance.  While that belief bordered on the fantastical, it is one that led me to apply to law school.   There should be an answer, a correct answer, and if I became learned in the law, I could help people find that answer.

During those first few months of law school, I became frustratingly aware that there is not one right answer.  However, during those years and through much maturity, I realized there could be an answer, in fact, a good answer, which came after full reflection of the entire question and a thoughtful analysis into any given problem.

What type of law did you practice before becoming a judge?
Before becoming a judge, I practiced mostly criminal law.  The first time I presented a case in front of a jury, I realized my passion was trial work. To a trial lawyer, there is little in the practice of law that outweighs the satisfaction of presenting a case to a neutral set of people and convincing those people that your interpretation of the facts and law is correct.  I have litigated hundreds of cases ranging from minor petit theft cases to all consuming premeditated murder cases in which the death penalty has been given as punishment.

What was your biggest obstacle during the early part of your career?
The biggest obstacle for me was dividing my time between career and family.  I have a husband and two sons.  Never once did I feel like I wanted to place my career on hold for a few years and stay at home full time with my children; however, I often felt guilty for not wanting to place my career on hold to stay home full time.  The tug- a- war between time in the office and preparing for trial versus time at home, was a constant challenge when my kids were younger.   Thankfully, along the way, a wise person told me, “everyone has a certain amount of time with their children, some more than others, but it is the quality of time spent with your children and not the amount of time that matters.”   The comment helped lessen my guilt feelings and allowed me to concentrate on being the best mom I could be while also, working as a trial lawyer.

What is the biggest challenge facing young women lawyers today?
Because I am not a practicing lawyer at this time, I don’t feel qualified to answer this question with any expertise; however, I am constantly told that women lawyers still have to deal with long held stereotypes in the work place.  I hear women state that their bosses, both male and female, assume they cannot work as long as their male counterparts, both during a work day, and during their lifetime.  If a problem arises in the office, women tell me the boss will typically look to the male lawyer to solve the issue.   A female attorney will have to first prove herself capable while a male attorney is assumed to be capable until proven otherwise.

What advice do you have for young women lawyers to overcome those challenges?
My best advice is to not take it personally.   I was often asked when walking into a deposition whether I was the court reporter.  In a nationally televised murder trial, where nine (9) lawyers were representing different sides, I was the only female attorney and the news media highlighted that fact.  In all seriousness, the fact I was the only female lawyer did not cross my mind until the reporter brought up the issue.  Do not focus on other’s misperceptions of you; and realize if they underestimate your abilities, it will be to their detriment.  During the judicial appointment process, one of the things of which I am most proud is many of my adversaries in trial were the very people who wrote the Governor and /or commented to the Judicial Nominating Committee on my behalf.  My strategy throughout my career has been to work hard and be prepared.  Eventually, my opponents, bosses, and colleagues, would develop a true picture of my abilities and work ethic.